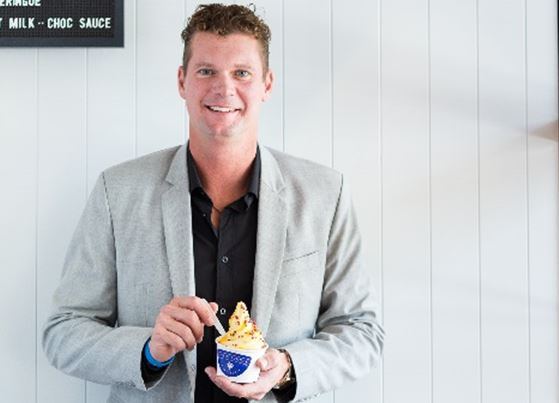 It’s not every day a life-changing business idea is sparked after cleaning soft serve machines at McDonald’s. This was the case for Justin Fischer and this year, his global soft serve and frozen yogurt machine business, Brullen, is set to turn over $35 million. The business has recently signed a deal with Gloria Jeans, whereby 1,000 Brullen soft serve machines will be in stores in 39 countries. Brullen manufacture and export its world class machines to food service businesses and retailers in Europe, USA, Canada, UAE, Asia, Africa and New Zealand.

Justin started working at McDonald’s at 14 years old and worked there for seven years. While his peers aspired to be crew managers, Justin always wanted to be a successful franchise owner. Within three years, he had learnt all there was to learn, including the value of work ethics. At 17, he became Australia’s youngest Manager and won every possible award within the business.

During his time there, Justin noticed that the soft serve machines were problematic and would break down regularly. He taught himself how to clean them which saved the owner a lot of money. From then on, Justin started approaching other franchise owners and cleaned their machines in his own time. Everyone he knew said he was crazy and would never be successful just from cleaning ice cream machines.

Using Yellow Pages, Justin called every McDonald’s franchise owner in his neighbourhood, but each one questioned why they would pay him to clean their machines when their own staff could do it. Justin called every single store in Queensland and again, was rejected by most owners. To prove the value of his skills, Justin decided to service machines in different locations for free for a month. Once those machines didn’t have any breakdowns for an entire month, the franchise owners were sold on utilising Justin’s services. His business grew through referrals and he eventually employed over 30 people.

At the peak of his success, his personal life took a beating as he navigated his way through a separation and Justin sold the company. With the success of his business, he had enjoyed a life of luxury but now found himself back at square one.

When Justin sold his business, the contract he signed meant he was unable to trade in Queensland for five years. In 2002, he packed up his life into his ute and drove down to Sydney to start his business from scratch. With little money, he was unable to afford furniture or even a fridge. For months he survived on a staple diet of bread, butter, milk and Maggi noodles.

With all the photos, information and references of accomplishments he had from Queensland stores, Justin was able to approach McDonald’s Sydney stores and service their soft serve machines quite easily. He built up his business again in Sydney, Melbourne and Adelaide. By the time Justin reached the rest of Australia, he was able to trade in Queensland again. Due to his motivation and hard work, he ended up servicing nearly every single McDonald’s in Australia.

Soon after, Justin saw gap in the market for high quality, reliable and high performance soft serve machines. With his experience working with ice cream machines for 20 years and his frustration in being unable to find a great product to import, Justin started manufacturing his own soft serve machines. He called the brand Brullen, which means ‘raw’ in German. Justin, along with his brother Scott, have designed and engineered soft serve machines with the retailer and consumer in mind. The machine components have been sourced from the most reputable manufacturers throughout Europe, in particular Italy, Germany and France.

“We’re proud that we have developed a reputable, high quality and durable range of soft serve and frozen yoghurt machines,” says Justin. “Our machines are user friendly, work seamlessly, are easy to clean and most importantly, they withstand the test of time. This is a testament to the importance of developing sustainable products that work. Brullen machines are great for families, food retailers, restaurant owners, hotels and basically any business who wants to dramatically add to their bottom line by incorporating soft serve into the mix!”

In January 2016, Brullen expanded to frozen yoghurt machines. The success speaks for itself and in October 2017, Brullen was invited to participate in HostMilano, the world’s leading trade fair dedicated to the catering and hospitality industry, emphasising the quality and standard of their machines.malaysia replica watches
where to buy fake watches in dubai
what is the best replica watch site

The only limitation is your imagination

Testimonials From some of our very happy customers

BRÜLLEN i91– Quick, reliable, easy to use, very handy machine.We are extremely happy with it. Easy Low maintenance. Will definitely invest in more Brüllen machines.

BRÜLLEN i91 – Far Superior machine than the Taylor machines. We are very happy with the ease of use, performance and the product quality is amazing.

BRÜLLEN i18 – Really Good. Extremely convenient. Easy to use, Cleaning is really easy as well.
Brullen Machine again without any hesitation 🙂

BRÜLLEN  i18 – Love the machine! Staff very happy with the reliability and how easy the machine is to use. Customers love our new dessert menu and thick shakes and milk shakes as well.